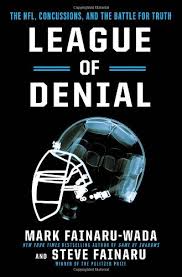 League of Denial by Mark Fainaru-Wada and Steve Fainaru is such a great book that you don’t have to be an avid football fan to appreciate it. I was blown away by the information provided on topics ranging from the first case of brain damage to be associated with playing football and the NFL’s denial of the facts. I was impressed and worried by the gritty stories of the men who played the game both knowingly and unknowingly, in spite of broken bones, bulging discs, and even multiple concussions that could occur during the same game. One minute you’re shaking your head in disbelief and the next you are almost in tears as you learn how severely these men suffer later in life. Some end their own lives but don’t shoot themselves in the head so their brains can be studied. As of 2012, there have been over 50 cases of death related to brain damage caused by playing football. I was saddened by this fact, but not overly surprised. I was surprised by how much effort the NFL put into covering it up.

Authors Mark Fainaru-Wada and Steve Fainaru also do an excellent job of tracking the NFL’s whereabouts during all of this commotion surrounding brain injury and death. Their research was a bit tedious and difficult to follow, but I appreciate the sheer amount of time they must have spent researching all of the facts. You had surgeons who could not speak their minds because they received money from the NFL to pay for private research. Others believed the NFL was sincerely interested in doing something to correct the problem and so they joined forces only to have their opinions marginalized if there was any correlation between football and brain damage. Companies such as Riddell made bogus claims that they produced helmets that were “41% more effective in preventing concussions.” Only to retract that statement at a later date. The NFL also created its own think tank in 1994 known as the Mild Traumatic Brain Injury Committee. The committee would publish many papers in a less-than-credible journal called Neurosurgery. All of its papers denounced all findings of football related brain damage.

At this point, I have just about had it with the NFL. The evidence is clear and a masterful job has been done following the many paths this story travels. From slides of brain tissue to lawsuits of impropriety, we are able to glean a lot about the downside of playing professional football. Is it worth the possibility of losing your mind? Would you allow your kids to play? For that matter, would you allow your child to play soccer? Head butting is a part of the sport. There is danger to any sport, but the brain is such a crucial part of the human body, how could you willingly injure it?

Never before have I been so interested in the brain and all of its power. How could I be so naïve? After all, I am a fitness trainer and the brain is responsible for movement. This book has truly changed my perspective. I have already taken action in regards to learning more about the brain. For one, the book I read right after this was The Inner Game of Tennis by W. Timothy Gallwey. A book that teaches you about tennis, but the mental side of sport. In addition to this, I enrolled in ZHealth, a system of training that focuses on the nervous system. This book changed my life and it can change yours as well.