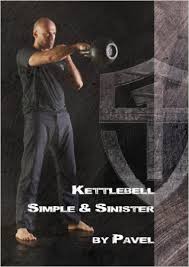 If “God is in the details” is a way of expressing that details are important to any task one accomplishes, then Pavel Tsatsouline is God and his book, KB Simple and Sinister is the Bible. Inside this “Bible,” Pavel teaches you how to perform two of the kettlebells most popular and most empowering moves, “Get Up” and “Swing.” He also spends time discussing the correct number of sets and reps to do and the amount of weight to use for each exercise, as well as the reasons why these factors matter. The “why’s” are the real eye-openers for me because they reveal tips about strength that you will rarely hear in Western gyms, but will undoubtedly make any man or woman stronger faster. “Kettlebells are like weightlifting times ten,” said Dennis Koslowski, former Olympic Silver Medalist in Greco-Roman wrestling. “If I could’ve met Pavel in the early 80’s, I might have won two gold medals.”

Western gyms are often focused on hypertrophy. A fancy word that basically means if you stimulate a muscle by doing set/rep schemes of 8-12 reps times 4 sets times 4-6 exercises on a full body workout day you will become stronger and your muscles will get bigger. I myself have followed regimens like this for years. However, Pavel focuses exclusively on strength which is what I think most hypertrophy-minded bodybuilding types are trying to achieve. A better way to achieve absolute strength is to follow the philosophies put forth in this book. Pavel teaches rep set schemes like 5 sets of 1 rep on each side when performing Get Ups and 5-10 sets of 10 reps when performing Swings. Then you’re done. Two simple and sinister moves and that’s it. Oh, and I forgot, there’s also a five-minute warm-up consisting of goblet squats, haloes, and glute bridges. You see the former workout strategy is constantly taking a muscle to failure leaving you sore and extremely fatigued. Pavel believes training is not a workout, but a recharge. You should leave the gym feeling better than when you arrived and not worse. This way you can return the next day and still have a high intensity “recharge” because you are not so burnt from the day before. In other words, “less is MORE.” If you do a little each day with a fresh body using only heavy weight (at least 90% of 1RepMax) long-term then you will be stronger than the guy or gal who trains to exhaustion during every workout.

Which brings me to another very important philosophy of Pavel’s “hardstyle training” as it is commonly referred. You must continuously increase your weight. By doing fewer reps, you have the time to recover and are able to lift at or near your max on a daily basis, thus making you stronger than you would be if you were constantly drained from your workouts. Think of it like you are a soldier at war. You never know what the next day has in store, but you need to be at your best or strongest day in and day out. You don’t have the luxury of taking a day or two off because you are sore from the previous day’s work. This is the hardstyle way of training. Being able to endure and perform at or near your highest level every day.

Aside from the areas I highlighted because they were most useful and compelling to me, doing fewer reps, sets, using heavy weight daily, and doing fewer exercises overall, there is also a brief history on the kettlebell that I found to be quite interesting. Known as a “girya” in Russia, its birthplace, the kettlebell was first introduced to the West in 1998 by Pavel, and has been in existence for over 300 years. The men and women who used them were referred to as strongmen and strongwomen. Now I understand why. “It is vain to do with more what can be done with less.”